Welcome to the website for Charité – Universitätsmedizin Berlin, a joint institution of Freie Universität Berlin and Humboldt-Universität zu Berlin.

To navigate directly to a specific page or section, please use the 'Go To' commands as follows:

Institute of Medical Physics and Biophysics

From here, you can access the Emergencies page, Contact Us page, Accessibility Settings, Language Selection, and Search page. 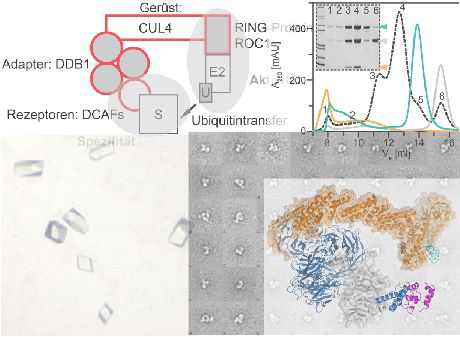 Information on the state of research in the field of ubiquitylation, with focus on Cullin4-RING E3 ubiquitin ligases

Ubiquitylation and the ubiquitin-proteasome system

Ubiquitin is a small, stable, 76-residue protein, highly conserved in eukaryotes. The enzymatically catalysed covalent attachment of ubiquitin to lysine amino acid side chains of cellular protein substrates is called ubiquitylation. Ubiquitylation regulates intracellular proteolysis, protein-protein interactions, enzymatic activities and subcellular localisation of these  substrates [6]. The ubiquitylation process is initiated by thioester formation between ubiquitin's C-terminus and the active side cysteine side chain of an ubiquitin-activating enzyme (E1). Activated ubiquitin is transferred to an active-site cysteine side chain of ubiquitin-conjugating enzymes (E2). The final formation of an amide-isopeptide bond between the ubiquitin C-terminus and the amino group of a substrate protein's lysine side chain is catalysed by E3 ubiquitin ligases [7]. Substrate-attached ubiquitin itself can be ubiquitylated at its N-terminus or any of its seven lysine side chains, leading in a repetitive process to poly-ubiquitylation. The number and type of ubiquitin linkages represent a code, which is read out by ubiquitin-binding domains of effector proteins, resulting in the corresponding cellular responses [6].

An important aspect of polyubiquitylation is the regulation of intracellular protein concentration by the ubiquitin-proteasome system [8]. The proteasome is a compartmentalised protease, consisting of a cylindrical core, covered on both ends by regulatory particles [9, 10]. Mainly lysine-48-linked, but also other types of poly-ubiquitin chains are recognised and bound by the regulatory subunit [11, 12]. In this way, the substrate protein is delivered to a neighbouring unfoldase, which threads the substrate protein chain into the core compartment. The inner surface of the central chamber possesses threonine protease activities which cleave the substrate into fragments of a length of approximately 7-9 amino acid residues [13]. The proteasome is the most important intracellular proteolysis system and indispensable for correct function of the immune system [14] and for proper spatiotemporal regulation of processes such as the cell cycle [15], transcription [16] and protein quality control [17].

In the ubiquitylation process, E3 ligases are important specificity factors, because they couple ubiquitin-loaded E2 with the protein substrate. According to their mechanism of action, E3 ligases are subdivided into three classes: RING (Really Interesting New Gene) ligases catalyse direct ubiquitin transfer from E2 to substrate, while HECT (Homology to E6AP C-Terminus) and RBR (RING-Between-RING) ligases transfer ubiquitin in a two-step process first to an E3 cysteine side chain and subsequently to the substrate [18]. RING proteins are by far the most prevalent type of E3 ligases in the human genome [19], and their mode of action will be introduced in the following.

The unifying characteristic of these ligases is the compact RING domain, containing eight conserved cysteine and histidine side chains, which point inwards and stabilise the fold by coordination of two zinc ions. A binding pocket on the RING domain surface allows for transient interaction with ubiquitin-charged E2. Spatially separated from the E2-ubiquitin binding site, RING ligases possess various substrate-binding domains which recognise specific substrate protein epitopes. A minimal substrate epitope sufficient for E3-binding, substrate poly-ubiquitylation and subsequent proteasomal degradation is called a „degron” [20]. The exact mechanism of RING-catalysed ubiquitin transfer is not yet completely clarified, but data so far lead to the hypothesis that on the one hand RING-domain binding immobilises E2-ubiquitin, and on the other hand degron-substrate binding domain interactions result in proper placement of a substrate lysine side chain for attack of the reactive thioester bond between E2 and the ubiquitin C-terminus [18, 21].

The Cullin-RING ligase (CRL) family evolved a modular architecture to bring the catalytic RING domain together with the substrate. Central component is a stable Cullin (CUL) scaffold comprising three helical Cullin repeats and a C-terminal domain. This domain binds with high affinity to the RING domain protein component called ROC/Rbx (Regulator Of Cullins/RING BoX Protein), resulting in the formation of a catalytic Cullin-RING core [22]. Five of the seven human Cullin variants (CUL1, 2, 3, 4A, 4B, 5) show this conserved architecture [23]. On the N-terminal end of the Cullin scaffold, opposite of the RING-domain binding area, adaptor proteins are attached, which vary depending on the type of Cullin: CUL1 binds Skp1 (S-phase kinase-associated protein), CUL2/5 bind the  Elongin B/C complex, CUL3 associates with BTB-(Bric-a-brac, Tramtrack, Broad-complex )domains und CUL4A/B with DDB1 (DNA damage-binding protein 1).

With the exception of CUL3 adaptors, BTB domain proteins, which directly recognise the ubiquitylation substrate, all other Cullin adaptors in turn bind to variable substrate receptors that are responsible for degron binding. These receptors are F-box proteins for CUL1-Skp1, BC-box proteins for CUL2/5-Elongin B/C and DCAFs (DDB1-CUL4A associated factors) for CUL4-DDB1 [24]. Exchangeability of these receptors greatly increases the number of possible substrate interactions of a single Cullin scaffold, resulting in approximately 400 Cullin-RING ligase complexes with different substrate specificity, accounting for approximately 20% of cellular proteasome-dependent proteolysis [25]. Furthermore, it is apparent that two molecular recognition processes are the key to understand Cullin-RING-dependent protein regulation; these are the binding of the substrate receptor to the Cullin-RING-adaptor scaffold, as well as the specific interaction of the receptor with epitopes in the substrate protein.

While CUL1, 2, 3 and 5 employ structurally conserved, compact Cullin-adaptor-receptor architectures, DDB1 was identified as fundamentally different type of adaptor for the CUL4 scaffold. DDB1 consists of three intertwined ß-propeller domains (BPA-BPC), where the N-terminus of Cullin4 interacts with the BPB domain [3]. BPA and BPC are connected to BPB through a flexible hinge [26]. Comparative crystal structure analysis of DDB1 bound to the DCAFs DDB2 and CSA, together with sequence analysis and peptide soaking experiments, revealed that DCAFs contain a cryptic helix-loop-helix motif (HLH box), which specifically interacts with DDB1 BPB, and which in this way connects the DCAF receptor with the CUL4-RING-DDB1 subcomplex [27, 28]. The molecular structure of such a DCAF-DDB1-CUL4-RING complex is shown in Figure 1. However, recent structural studies of the DDB1-binding mode of Cereblon, a thalidomide-binding DCAF, revealed a different mode of attachment to the DDB1 adaptor. Here, Cereblon helices 3-5 mainly interact with the DDB1 BPA domain [29, 30]. Together, these results may indicate a certain plasticity of DDB1 interactions with different DCAFs. Systematic study of these interactions is necessary to understand their variability and to identify further potential DCAFs.

Approximately 50 putative DCAF substrate receptors have been identified in proteomic analyses, 18 of them at least in two studies [27]. Most of these proteins contain a ß-propeller domain [31]. Knowledge of the substrate and especially understanding of the molecular basis of specific substrate recognition however is restricted to a few cases.

A well described example is the above mentioned DDB2 protein, which binds with high affinity to UV-induced DNA damage. Co-crystallisation of DDB1, DDB2 and damaged DNA sequences show that the N-terminal HLH box of DDB2 is located on the bottom side of its ß-propeller domain and attaches to DDB1. The damaged DNA double strand is bound specifically on the top side of the ß-propeller. In this way, chromatin-associated proteins near the site of DNA damage are brought into vicinity of the CUL4-RING catalytic core and are subsequently ubiquitylated and degraded. This process is an important step in the global nucleotide-excision repair mechanism [27, 32, 33].

Also, there are data on the substrate specificity of DCAF1 (also known as VPRBP). DCAF1 is essential for embryonal development and for the regulation of DNA replication [34]. DCAF1 recognises a degron in the DNA replication factor Mcm10, whose regulated proteolysis is crucial for assembly of the DNA replication complex [35]. A putative chromodomain upstream of the ß-propeller domain binds an EZH2-generated mono-methylated peptide sequence in the nuclear receptor ROR-α, leading to its degradation with implications for gene transcription [36]. Further upstream of the chromodomain, DCAF1 possesses a putative kinase activity, but its relevance for DCAF1-mediated ubiquitylation processes has not been analysed yet [37]. Furthermore, there is evidence that the N-terminal domain of DCAF1 binds to TET dioxygenases, leading to their mono-ubiquitylation and activation [38]. Finally, DCAF1 also seems to be involved in the constitutive turnover of the uracil-DNA glycosylases UNG2 and SMUG1 [39].

DCAF2 (CDT2, DTL, CDW1, L2DTL, RAMP) is responsible for the poly-ubiquitylation of several proteins involved in DNA replication and repair regulation, such as Cdt1, p21, Set8, Pol η, E2F, Chk1 and XPG [40-42]. Interestingly, for most of these substrates, binding to DNA-loaded PCNA with high affinity is a prerequisite for degron recognition by the DCAF2 substrate receptor, most probably to ensure proper spatiotemporal regulation of target degradation [40, 43].

DCAF3 (AMBRA1) is involved in regulation of autophagy and seems to influence the stability of the proto-oncogene c-myc [44-46].

DCAF7 (HAN11, WDR68) has originally been identified as scaffolding protein for the kinases DYRK1A, DYRK1B, HIPK2 and MEKK1 [47, 48], and also as an adaptor to bring these kinases together with the adenoviral oncoprotein E1A [49]. There are very recent proteomic and functional data showing that DCAF7 induces poly-ubquitylation and degradation of DNA ligase I [50].

DCAF8 (H326, WDR42A) mediates the poly-ubiquitylation and degradation of CDC25 [51]. Genetic analysis indicates that a mutation in DCAF8 is the cause of a specific variety of axonal hereditary motor and sensory neuropathy [52].

DCAF11 (WDR23) has been recently identified as CUL4-DDB1 substrate receptor for SLBP, a key factor in histone mRNA processing. However, there is conflicting evidence if DCAF11-mediated SLBP ubiquitylation leads to proteasomal degradation or to activation. Also, SLPB phosphorylation might be involved in DCAF11-binding [56, 57]. In C. elegans, DCAF11 regulates the turnover of the transcription factor SKN-1, probably in a SKN-1 phosphorylation-dependent manner [58].

However, the substrate range of the CUL4-DDB1-DCAF system is not fully explored yet, and it is obvious that diverse mechanisms concur to guarantee substrate specificity in the system. Especially DCAF1 seems to possess multiple degron recognition modes, determined through separate degron binding domains. This might also be the case for other multi-domain DCAFs such as DCAF3, 6, 9, 14 and 19. Molecular models of these binding events are crucial to understand processes including but not limited to DNA replication, DNA repair and regulation of transcription.

An important aspect of the Cullin-RING system is its interaction with virus proteins in infected cells. During an evolutionary adaptation process to their primate hosts, retroviruses evolved countermeasures against host antiviral factors [59]. These countermeasures are the so-called "accessory" proteins, and they often hijack the host cell's ubiquitin-proteasome system to overcome early intracellular infection barriers which are called restriction factors [60]. In particular, accessory proteins redirect the specificity of host Cullin-RING ligases towards restriction factors, leading to their proteolysis, which ultimately results in improved replication conditions for the virus [61]. Important examples are the modification of the CUL5 substrate receptors Elongin B/C by the HIV-1 accessory protein Vif, leading to proteasomal degradation of the restriction factor APOBEC3G [62, 63], or proteolysis of the tetherin restriction factor, which is induced by modification of a CUL1 substrate receptor through the HIV-1 accessory protein Vpu [64, 65]. Also, the proteasomal degradation of the restriction factor SAMHD1 is caused by interaction of the HIV-2 accessory protein Vpx with the CUL4 receptor DCAF1 and the resulting DCAF1 specificity modulation [66, 67]. We have previously characterised the divergent molecular mechanisms of SAMHD1 recognition by DCAF1 and Vpx isolated from two different simian immunodeficiency viruses (SIVs) (Figure 2, [68, 69]). In general, structural analysis of such processes allows for direct molecular insights into host-virus adaptation mechanisms and might additionally pave the way for the development of new therapeutic opportunities, since it has been demonstrated that intracellular restriction factors influence retrovirus tropism [70, 71].